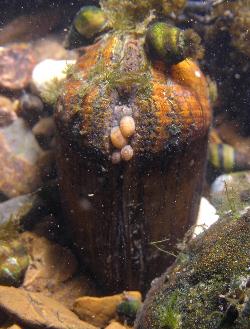 Captive propagation and reintroduction of freshwater mussels has become a common management tool over the last ten years. Freshwater mussels are now routinely propagated in hatcheries across the United States, including at many National Fish Hatcheries. We are using population genomic analyses to inform the development of propagation plans. Our research will be used to inform important hatchery decisions such as choice of appropriate broodstock populations and propagation protocols that ensure appropriate levels of genetic diveristy in captively propagated populations. Species we are working on include Spectaclecase (Cumberlandia monodonta), Cumberlandian Combshell (Epioblasma brevidens), and Louisiana Pearshell (Margaritifera hembeli). Our work has resulted in specific guidelines for management of Louisiana Pearlshell (see plan here). A publication describing M. hembeli conseravtion genomics was Published in Conservation Genetics (See publications here). As we generate data for other mussel species, specific management guidelines will developed.

Building on our Leptoxis ampla project (see below), we were funded to examine population genomics of over 15 pleurocerid species. We are using a comparative approach to examine genetic diversity of common riverine species, candidate and listed species, and narrow range endemics found in less than five springs. We are examining whether differences in life history contribute to differences in genetic diversity and population connectivity. We are also examining broad patterns of riverscape genomic variation in each species. Ultimately, these data will be used to inform listing decisions and management plans. They will also increase our understanding of freshwater ecosystems throughout the United States and whether general hypotheses about genetic diversity that were developed for non-molluscan freshwater invertebrates can be applied to mollusks. The first publication from this study was led by an undergraduate researcher in the lab, Aaliyah Wright, and recently published in PeerJ. See publication here..

Aquatic invasive species threaten the survival of natural populations. In late 2019, a population of the Asian native Northern Snakehead (Channa argus was discovered in Georgia. We genitically characterized the population, and out data indicated that collected juveniles were not all offspring of the collected adults. Our finding were published in BioInvasions Records. Broadly, out research indicated that the invasion dynamics were more complex than the invasion a single mating pair that gave rise to a relatively large population. Currently, we are using RAD-seq methods and genetic data on populations from across the US and Asia to better model how Northern Snakehead became established in Georgia.