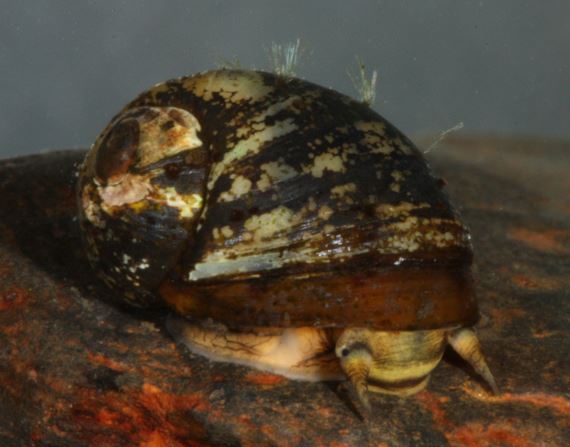 Snails in the family Plueroceridae are found in springs, creeks, and rivers across the United States, east of the Rocy Mountains. Yet, a robust phylogenetic hypothesis for Pleuroceridae does not exist. This limits our ability to understand these snails. For example, a phylogenetic hypothesis is needed to better understand how different egg-laying behaviors seen within Pleuroceridae have evolved. We are using an anchored hyrbid enrichment (AHE) approach to sequence hundreds of genes and infer the phylogeny of Pleuroceridae. This project combines fieldwork to collect snails, lab work to generate molecular data, and computational biology to analyze genomic data for hundreds of individuals. Preliminary results indicate extensive polyphyly of recognized genera.

Freshwater mussels have received much more research attention than freshwater snails, but the systematics of some mussel groups are still poorly understood. We are currently studying Anodontini mussels with an emphasis on species from the Uwharrie Mountains region in North Carolina. The Uwharrie Mountains are one of the oldest geological formations in the United States, and our work has uncovered multiple instances of undescribed diversity. We are working on resolving relationships among Alasmidonta species and related genera so new species can be accurately classified. This work is critical for effective conservation of freshwater mussels as conservation plans cannot be designed if species are not known to science.

Captive propagation and reintroduction of freshwater mussels has become a common management tool over the last ten years. Freshwater mussels are now routinely propagated in hatcheries across the United States, including at many National Fish Hatcheries. We are using population genomic analyses to inform the development of propagation plans. Our research will be used to inform important hatchery decisions such as choice of appropriate broodstock populations and propagation protocols that ensure appropriate levels of genetic diveristy in captively propagated populations. Species we are working on include Spectaclecase (Cumberlandia monodonta), Cumberlandian Combshell (Epioblasma brevidens), and Louisiana Pearshell (Margaritifera hembeli). Our work has resulted in specific guidelines for management of Louisiana Pearlshell (see plan here). A publication describing M. hembeli conseravtion genomics was Published in Conservation Genetics (See publications here). As we generate data for other mussel species, specific management guidelines will developed.

As part of a multi-state effort to improve conservation status of Brook Floater, we are examing range-wide conservation genomics of the species. Brook Floater ranges from North Georgia to Canada along the Atlantic Coast, but mnay population have declined or been completely extirpated. We are using a 3RAD approach to generate thousands of genetic markers to examine genetics diversity, population connectivity, and historical demography.

Building on our Leptoxis ampla project (see below), we were funded to examine population genomics of over 15 pleurocerid species. We are using a comparative approach to examine genetic diversity of common riverine species, candidate and listed species, and narrow range endemics found in less than five springs. We are examining whether differences in life history contribute to differences in genetic diversity and population connectivity. We are also examining broad patterns of riverscape genomic variation in each species. Ultimately, these data will be used to inform listing decisions and management plans. They will also increase our understanding of freshwater ecosystems throughout the United States and whether general hypotheses about genetic diversity that were developed for non-molluscan freshwater invertebrates can be applied to mollusks. The first publication from this study was led by an undergraduate researcher in the lab, Aaliyah Wright, and recently published in PeerJ. See publication here.