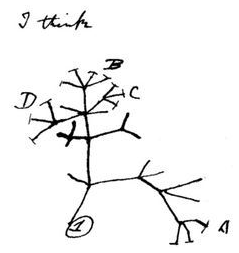 Snails in the family Plueroceridae are found in springs, creeks, and rivers across the Eastern United States. Yet, a robust phylogenetic hypothesis for this family does not exist. This limits our ability to understand these snails. For example, a phylogenetic hypothesis is needed to better understand how different egg-laying beahviours seen within Pleuroceridae have evolved. We are using a target capture approach (also known as anchored enrichment) to sequence hundreds of genes and infer the phylogeny of Pleuroceridae. This project combines fieldwork to collect snails, lab work to generate molecular data, and computational biology to analyze genomic data for hundreds of individuals.

Freshwater mussels have received much more research attention than freshwater snails, but the systematics of some mussel groups are still poorly understood. We are currently studying Anodontini mussels with an emphasis on species from the Uwharrie region in North Carolina. The Uwharrie Mountains are one of the oldest geological formations in the United States, and our work has uncovered multiple instances of undescribed diversity. We are working on resolving relationships among Alasmidonta species and related genera so new species can be accurately classified. This work is critical for effective conservation of freshwater mussels as conservation plans cannot be designed if species are not known to science.

Phylogenetics and speices boundaries of Juga

Juga is a genus of freshwater snails found from Northern Washington to Northern California. These snails are in the family Semisulcospiridae, which is the sister family to Pleurocerida. Juga includes wide ranging riverine species and narrow range endemics only found in one or two springs. Some of these species are undescribed and often referred to with an informal system of common names. This complicates efforts to effectively conserve Juga biodiversity. The first component of this research was elucidating relaionships within the genus , which was published in Molecular Phylogenetics and Evoltution. We are now working on formal taxonomic revisions and the description of new species. This work is being done in close collaboration with Ellen Strong at the National Museum of Natural History.

We are broadly interested in deep invertebrate relationships and the methods used to infer them. Much of my past work has focused on inferring relationships among ctenophores and determing their placement on the animal tree of life. We do not currently have any active projects on deep relationships of invertebrates, but the lab is generally interested in understanding how different phylogenetic methods and models perform at deep and shallow evolutionary timescales.